7 New Manager Problems and How to Prevent Them

Making the move from individual contributor to leader is tough, and the numbers show it. In this article, we give you 7 practical ways to support your rising leadership talent through the transition. 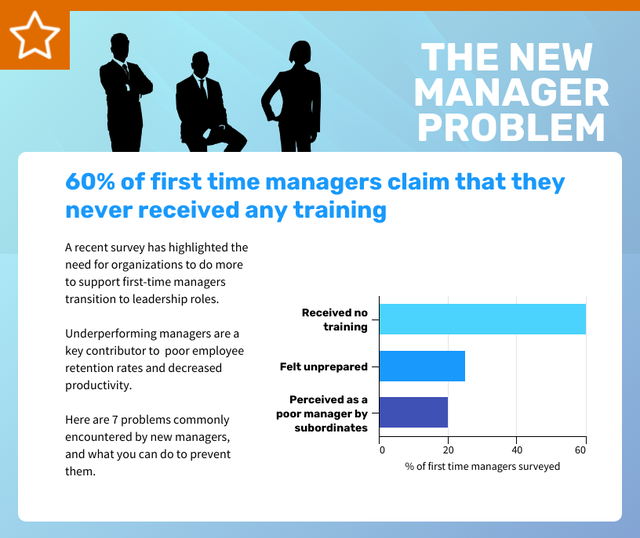 By David Bradshaw, SVP Client Services
David is a highly experienced consultant specializing in business strategy, lean operations/automation, and human resources. He holds a Master's degree from the University of Cambridge, UK, and an MBA from Quantic School of Business and Technology.

According to a recent survey, almost 60% of new managers claimed they did not receive any training to prepare them for their new role. A quarter of the respondents didn’t feel ready to lead other people, and a fifth of new managers are doing a poor job

This is what we call the New Manager Problem.

A new manager is someone who has been promoted to a people management role within the last two years. As we have found, new managers are not well prepared for what they are about to face and this can lead to problems in the workplace.

Managers are responsible for managing their employees and ensuring that their needs are met. They need to be able to provide guidance, support, and feedback as well as handle any conflicts that may arise between them. The success of the company relies on managers being able to do this effectively but many of them don't have the necessary skillset or training. This can lead to problems such as low employee morale and high turnover rates.

In this article, I share with you the most common problems associated with the first time manager, and what you can do (as an HR professional or member of the senior leadership at your organization) to prevent them.

1 - Things falling through the cracks

New managers often take time to become fully effective - and in the meantime, things are going to fall through the cracks. Often this is because new managers don’t receive a full description of what they are supposed to do (i.e. they don’t realize it is part of the job). Other times, it is because new managers are not accustomed to having to manage such a broad array of activities, and don’t have the tools to keep themselves organized and on top of their to-do list.

This can happen at the personal level, or at the team level, or both. Making sure roles and responsibilities are clearly defined, documented and communicated solves one part of the equation. Building a community of managers at your organization is another powerful technique - a forum where new and seasoned managers can get together (physically or virtually) to discuss aspects of the role, share concerns from within their teams, or talk about how they are solving certain problems. It will help your new managers understand how others are tackling the role, and perhaps shed some light on some areas of the role that were previously blind spots.

Any HR professional will be able to share many stories of new managers ‘taking matters into their own hands’, ‘going out on a limb’, or not being a ‘safe pair of hands’ - and the amount of effort needed to clear up after them.

Yes, new managers have a tendency to act alone, without realizing the consequences of their actions. It is understandable - after all, they don’t know what they don’t know, and they are often acting with naivety rather than malice (although do look out for the ‘act now, beg for forgiveness later’ attitude - it destroys trust).

The way to prevent this is to make sure that you have set clear boundaries with your new managers, and to make sure that they have trusted support to turn to for advice before taking any action that could have undesirable consequences. A good partnership with a trusted member of the HR team or a respected, tenured leader in your organization will reduce the instances of new managers going rogue. A mentoring program for new managers can be very effective here.

New managers are often inexperienced delegators. This can go one of two ways - either team performance can slide due to lack of attention and oversight from the manager (things falling through the cracks, see above), or the new manager becomes so obsessed with team performance that he or she starts to micromanage.

It should go without saying that both outcomes are undesirable, but micromanagement is especially insidious as it can alienate team members and create a toxic environment. Either way, a proper grounding in good delegation technique will go a long way here, as will an introduction to situational leadership theory.

It it very common for people in individual contributor roles to openly display favoritism. People may socialize in particular groups, both inside and outside of the workplace. They may openly discuss how they feel about other employees with their colleagues. Whether we like it or not, organizations are a breeding ground for complex social hierarchy. Managers newly promoted from an individual contributor role often struggle with the social baggage from their immediate past, as such displays of favoritism are not tolerated nearly as much at the manager level. In fact, showing favoritism can quickly lead to legal trouble for the manager and the organization. To make matters worse, the new manager might not even be conscious of the signals they are giving off.

New managers must be trained to avoid this behavior. Unconscious bias awareness is a useful tool.

Enthusiastic new leaders want to make change very early in their management careers. Usually this is down to wanting to demonstrate personal effectiveness and value to the organization. Sometimes, new leaders can be opinionated about how certain tasks should be done, and will try to make changes in that direction without regard for the opinions of those actually doing the job.

If such changes are instigated without proper consultation and an appropriate level of change management, they can seriously backfire - especially if the changes affect stakeholders from outside of the new manager’s team/function.

To prevent this, new managers should be given broader visibility to how the rest of the organization functions, and should be encouraged to spend time building cross-functional relationships. They should be invited to cross-functional leadership meetings, where proposed changes can be aired and discussed.

New managers almost always underestimate the importance of communication and also the amount of effort required to do it well. In this context, silence is not golden and will lead to team members speculating behind the leader’s back about what is really going on behind the scenes. Meanwhile, the oblivious new manager will assume everything is fine. In these times of remote and hybrid working, the challenge of keeping a team informed and feeling part of a community has never been greater.

Work with your new managers to help them develop a proactive communications plan. There are many different types of communication that can be used in the workplace - the most common ones being one-to-one and group meetings, emails, phone calls, videoconference and company chat apps. It is important that a new manager understands how and when to use each channel. For example, one-to-one meetings are an opportunity for employees to bring up their concerns or needs and have them discussed in private. These meetings are also a good time to discuss individual performance, and to exchange feedback. Group meetings are a way for the whole team or department to discuss company metrics, hear about company news and announcements, and to come together as a community.

Let’s go back to the statistics in the opening paragraph - over 60% of new managers were not given any training as they transitioned to management, and 25% did not feel ready to take on the role. It is not surprising that a lack of confidence is a common problem for new managers. A team leader lacking in confidence can come across as a weak leader - and will quickly lose followers as well as open themselves up to people trying to take advantage.

Training and support are vital ingredients in the confident manager recipe. Leadership, to a large degree, can be taught and developed over time. Given the risks that the New Manager Problem presents to our organizations and employees, the investment is a sound one. Look for an all-round course that is specifically aimed at first time managers. Your new managers and their subordinates will thank you for it.

My best tip for combating the New Manager Problem

Throughout my career, I have learned the importance of building a talent pipeline - for identifying and nurturing promising talent before they are thrust into the pressures of taking a leadership role. This works wonders for preventing the New Manager problem, as well as improving employee retention and engagement.

For example, as a senior leader, consider implementing a mentoring or shadowing program for non-managers who are showing interest and promise. Career-minded non-managers will be very grateful for the experience, which will be repaid through increased loyalty to the organization and its leadership. Good managers often enjoy helping develop others, so everybody wins. Furthermore, you’ll be in a much better place to select the right candidates for leadership roles when the time comes.

Northstar has developed an affordable, comprehensive New Manager Bootcamp training program to help new managers and organizations boost their leadership effectiveness. You can read more about it here.